World heavyweight champion Wladimir Klitschko has denied that he was involved in a brawl with UK fighter Dereck “Del Boy” Chisora while both were vacationing at the Spanish resort of Ibiza.

An official statement on the Klitschko Brothers’ website reads:

“I’m quite shocked by the recent British media stories about an alleged brawl between myself and Dereck Chisora. I am a professional prize fighter and let my fists do the talking only inside the ring. I don’t want to comment on Chisora’s psychological issues.” 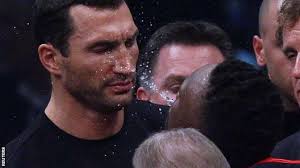 Chisora had made statements on his on social media pages regarding running into Wladimir twice in Ibiza and becoming involved in a heated situation with him.

According to Wladimir, most of the action took place in Chisora’s often befuddled mind.

“I can’t say much about it,” Chisora now says, no doubt realizing that the British Boxing Board of Control, who just recently gave him his license back, are paying close attention to his antics.

“But those brothers won’t have a quiet holiday if I have anything to do with it,” Chisora continues. “It was good fun, I can’t complain!.”

Perhaps Chisora should be thanking his lucky stars that referee Phil Edwards counted American Malik Scott, who was clearly unhurt, out at the count of nine last week, allowing Chisora to claim victory and continue his career. Another high-profile loss would have just about ended things for the eccentric UK brawler.

As it stands, Chisora is next due in the ring on September 21 in London against a fighter yet to be named.