Floyd Mayweather, Manny Pacquiao, and the Unforgiving Science of Aging

Much of the fight world wakes each morning to see if there’s any news on whether this time there actually will be a fight between Floyd Mayweather and Manny Pacquiao.

However, doubters among us suspect that given the age of the fighters, what we’re anticipating may not be worth waiting for. Science pretty much confirms their doubts.

In a 1988 issue of the Journal of Gerentology, scientists Robert Schulz and Christine Curnow presented an important study that examined peak performance among what the researchers termed “superathletes” – successful competitors at the top of their games.

No references to boxers could be found in the study abstract, but the researchers concluded that for most categories of performance in baseball, for example, the peak age of performance was “equivalent to that of a long distance runner, about 28 years of age.” Top tennis players were found to reach their highest levels of performance at age 24.

Both sports are somewhat comparable to boxing in athletic demands. Yet the tentative date for the super fight that never gets fought is May 2, when Mayweather will be 38 and Pacquiao 36.

Boxing, of course, demands all athletic skills you can name: speed, strength, hand-eye-coordination, endurance, plus a giant dose of something else — mental and physical courage, the ability to push through injuries and setbacks and prevail. A sprinter who falls down won’t get up and beat other world-class sprinters. Also, a football or basketball team down by 20 points can’t win in the last ten seconds.

But a boxer can lose eleven-and-a-half rounds and win by knockout. It’s a possibility that makes the sport like no other. 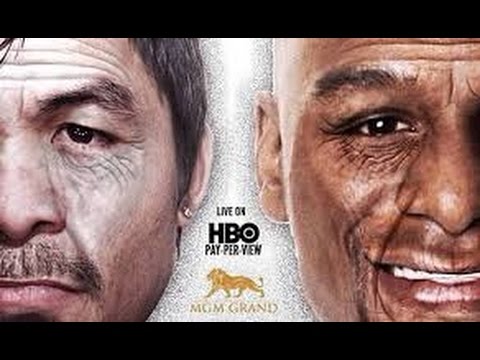 Manny and Floyd: time waits for no one

The most successful superathletes in the study were golfers, who peaked at about 31. You might think that improved training methods would extend the length of athletic careers, but the study found that the age of peak performance remained remarkably level over the years.

Heavyweight boxers, like long-distance runners, also tend to maintain their skills over a longer career. Split-second timing is still important to them, but they find it easier to compensate for its diminishment by using their experience, strength, and other assets.

Fighting at 147 pounds, Mayweather and Pacquiao are many pounds below this heavyweight exception. They’re too small to maintain their peak and too big to move as explosively as they once did.

Meanwhile, Dr. Richard Goldberg, who taught many years at the University of Southern California Medical School, told me that the diminishment of lung capacity is inescapable over time.

A study by pulmonary expert Gulstan Sharma and geriatric researcher James Goodwin, both of the University of Texas, determined that “the lung matures by age 20–25 years, and thereafter aging is associated with progressive decline in lung function.” Which explains why aging fighters can’t sustain as much action per round. They can’t breathe the way they used to.

We live in a time when leading politicians deny the science of evolution, climate change, and other facts that upset their world view. But the sweet science is just as unyielding as other science truths.

Which brings us back to Mayweather and Pacquiao. Like most fighters, they’ve put on muscle over the years and moved up from one weight division to the next so that the force of their punches is expended on bigger, hardier targets.

One way fighters can compensate for their age is to shift less of their body weight into a punch, which gives them more time to recover and defend against anything coming back. This subtracts from their power.

All this helps explain why, if you don’t count the freakish sucker-punch ending to the terribly officiated Mayweather-Victor Ortiz contest in 2011, Floyd hasn’t scored a kayo since 2007 against Ricky Hatton, eight bouts ago.

Manny hasn’t scored a stoppage since 2009 against Miguel Cotto, ten fights ago.

Mayweather and Pacquiao have lasted this long because both are uniquely skilled. Also, by competing only about twice a year, they can better prepare themselves without taking so much debilitating punishment.

When Sugar Ray Leonard and Thomas Hearns first fought, they were 24 and 22 respectively. Muhammad Ali and Joe Frazier were 28 and 26. Jake LaMotta and Sugar Ray Robinson were both 20.

Looking at the science, a contest now between Pacquiao and Mayweather can’t compare.

And the unforgiving athletic clock still ticks for both.