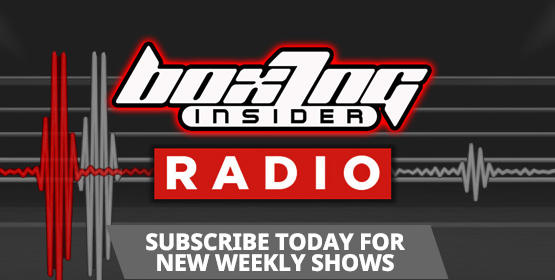 The BoxingInsider.com crew breaks down the latest boxing news and views from the boxing world. Boxing Veteran Jose Guzman joins a rotating cast of boxing insiders discussing the current landscape from the point of view of someone who has been in the ring!

Thursday May 28th
Ep 30: Kenny Porter talks Shawn Porter and Covid-19
Kenny Porter, Father, Trainer, and Manager of 2x world Champion Shawn Porter joined boxinginsider radio for an in-depth conversation on all things boxing. We discussed the career plans for Shawn Porter, training in a Covid-19 world, and what needs to happen for Shawn Porter to make his return. We also discussed potential fights including a fight with Terence Crawford and rematch Errol Spence. Curtis Jones joined Larry Goldberg for this can’t miss interview.

Listen to my podcast
Friday May 22nd
EP 29: Boxing Gyms in a post Covid-19 World
We wanted to get the scoop on the gym business and we reached out to the owners of 2 of the top boxing gyms in the country. Justin Fortune, Owner of the famed Fortune Boxing in Hollywood, and Manny Pacquiao’s Strength and Conditioning coach joins us to discuss the current state of the boxing gym business his plans to reopen Fortune Boxing. The always colorful Eric Kelly, owner of South Box gym in the Bronx joined us to discuss his new gym facility and plans to keep his clients safe. Both agreed we can expect less crowded gyms with social distancing, no sparring, and little to no mitt work.

Listen to my podcast
Sunday May 17th
EP: 28 Ken Shamrock Discusses UFC Career and Bare Knuckle Boxing
UFC Hall of Famer Ken Shamrock joined boxinginsider.com Radio for a wide ranging interview in support of his new book Shamrock: The Worlds Most Dangerous Man. We discussed his UFC Career and legacy, disagreements with Dana White, drug use, bare knuckle boxing, fixed fights, fighting Mike Tyson, and so much more.  Larry Goldberg of BoxingInsider.com ran KenShamrock.com during his UFC run and had a lot of specific questions about things that went down in that era.

Listen to my podcast
Saturday April 11th
EP 26: “In Quarantine”: Bob Arum Calls In
BoxingInsider.com Radio returns with a big newsmaker interview with Hall of Fame boxing promoter Bob Arum. We discussed how the Covid-19 pandemic is effecting boxing. Bob explained how the decision was made initially to cancel the fights at MSG and what needs to happen for Top Rank to feel confident promoting fights again.  Bob also discussed Wilder-Fury 3, Spence-Crawford, working with PBC, UFC having to cancel their fights due to political pressure, and much more. Bob Arum was interviewed by boxinginsider.com owner Larry Goldberg.

Listen to my podcast
Monday April 6th
EP 25: In Quarantine: Boxing is Paused, for how long?

It’s the Zab Judah Show this week. We have former undisputed welterweight champion Zab Judah in studio talking all things Wilder vs Fury 2, Crawford vs Spence, Growing up with Mike Tyson, and his new acting career.

Shakur Stevenson joined us on the phone to discuss his big fight  in NYC, calls out Leo Santa Cruz, and talks all things boxing with Zab Judah.


Tuesday March 3rd
EP: 23: Bernard Hopkins & Shannon Briggs Interviews
BoxingInsider.com Radio is back with two huge interviews discussing the ongoing fall out from the Wilder vs Fury 2 fight. Future Hall of Famer Bernard Hopkins joins us to discuss the Wilder - Fury 2, Canelo, his hall of fame induction, and talks about the direction the game of boxing is going.  “Lets Go Champ” Shannon Briggs discusses the Wilder - Fury 2, his upcoming documentary, and life after boxing. BoxingInsider.com Radio is an ensemble cast featuring Jose Guzman, Henry Deleon, Curtis Jones, and Larry Goldberg.

Former Heavyweight Champion Larry Holmes calls in and gives his unique insight on the fight and the aftermath.

Tyson Furys last opponent Otto Wallin joined us in studio to talk about the fight and his future. 17 Year old prospect Vito Mielnicki Jr. discussed fighting on the undercard.

Tyson Fury’s last opponent Otto Wallin sits in studio with us to break down the fight.

We break down the fight and make a friendly wager on who is going to win.

WBC President Mauricio Sulaiman joins us by phone to preview Wilder-Fury 2, and to discuss all things boxing.


Wednesday February 5th
EP 19: Boxing is Becoming a Circus
This Week we have a lively discussion on current events. The "Youtubers" are back and trying to be taken seriously. Steven A. Smiths drops a comical boxing training video. Canelo’s next fight is close to being made. Tyson Fury announced his plans to end his career  A Fan harassed Floyd Mayweather Super Bowl weekend. Ivan Redkach gets a 1 year suspension for biting his opponent.

We are joined on the phone Victor Ortiz in a rare wide raging interview where he discussed Floyd Mayweather and his future in boxing.

The trailblazer of female boxing Christy Martin joined us to discuss her Hall of Fame Indiction and her new career as a boxing promoter.

Wednesday January 8th
BoxingInsider Radio: 2020 Boxing Preview + Pistol Pete Dobson Calls in
The gang is back for the first show of 2020. We start with the fiasco that closed 2019 with Julio Cesar Chavez jr quitting against Daniel Jacobs. Errol Spence and Terence Crawford are trying to make a fight. We preview most of the rumored fights we might see in 2020. We speak to undefeated prospect Pistol Pete Dobson on the phone.

Tuesday December 24th
Boxing Insider Radio - 2019 Year In Review & Christmas Show
We look back at all the biggest fights from 2019 and look ahead to 2020.

Tuesday December 17th
Andre Berto Talks About His Return from Injury and Floyd Mayweather
Former Welterweight champion Andre Berto might be hard at work continuing his rehab from a torn bicep, but he still had time to sit down with Boxing Insider Radio which is aired every Tuesday and is available on iTunes, Spotify, Spreeker, and Boxinginsider.com to discuss how he expects his 2020 year to go along with how disappointed he was in Andy Ruiz Jr and his performance against Anthony Joshua.

Listen to my podcast
Wednesday December 11th
Andy Ruiz Parties and Anthony Joshua Wins Back Titles + Claressa Shields
Anthony Joshua wins back his titles in Saudi Arabia when Andy Ruiz showed up out of shape after 6 months of fame . Boxing Insider radio breaks down the fight, the aftermath, and what the future holds for both Joshua and Ruiz.

The greatest Woman of All time Claressa Shields calls in for a lively interview to discuss his her upcoming fight. Andre Berto called in and we discussed Floyd Mayweather and his comeback.

Listen to my podcast
Wednesday December 4th
Dennis Hogan Interview on BoxingInsider Radio
Dennis Hogan talks to BoxingInsider.com Radio about his huge fight with Jermall Charlo and his controversial loss to Jaime Munguia.

Listen to my podcast
Wednesday December 4th
Boxing Insider.com Radio: Andy Ruiz vs Anthony Joshua Preview
Andy Ruiz fights Anthony Joshua in their highly anticipated rematch for the unified Heavyweight championship this weekend from Saudi Arabia. We Break down the fight, the controversy, undercard, and fall out from what may be the biggest fight of the year.

Tuesday November 12th
Boxing Insider.com Radio Episode 6: KSI vs. Logan Paul Drama, Otto Wallin in studio
The boxing panel got heated this week discussing the KSI/Logan Paul drama. Otto Wallin joined us in studio to discuss the Tyson Fury fight and his future. We were joined by 17 year old boxing sensation Vito Mielnicki on the phone. The panel closes out the show discussing who should be inducted into the boxing Hall of Fame this year.

Jose Guzman, Curtis “Spice” Jones, Henry Deleon, and Larry Goldberg make up an ensemble cast to discuss all the latest issues in the sport of boxing.

Tuesday November 5th
Boxing Insider.com Radio Episode 5:  Canelo Knocks Out Kovalev, DAZN keeps us up late, Don King and John Gotti
Canelo has cemented him self as boxing’s pound for pound king while DAZN made boxing fans take a backseat to the UFC. We took phone calls from Former WBA Champion Austin Trout, Jose Guzman, and “Angry” Rich Mancuso. Jeandra Lebeauf caught up with Larry Merchant after the Canelo fight. Sammy “The Bull” Gravano talks about the mafia ordering Don King dead when he refused to do what John Gotti wanted.  Yurik Mamedov joins us in studio to talk about his boxing journey and the plight of the Yezidi

Listen to my podcast
Tuesday October 22nd
BoxingInsider.com Radio Episode 3
Jose Guzman and Curtis Jones discuss the tragic death of Patrick Day. This segment turned into a discussion on safety in boxing and what can and can’t be done to make this sport safer.  In current events we discuss Errol Spences road to recovery, Terence Crawford, Gervonta Davis’s next fight, the light-heavyweight division, and Mike Tyson’s current boxing skills.  We close out the show discussing the current heavyweight scene and tell you who is the best heavyweight in the world is.

Floyd Mayweather Tired of Fighters Calling Out Manny Pacquiao: "Don’t Chase Him, You Young Guys Chase Each Other"